A Note to My Readers:  Our ancestors are more than names, dates places…and shared DNA.   Some we take a shine to and thus we begin to explore the history in which they played a role.   Genealogy is history,  after all.  One of my favorite ancestors is Samuel Weyburn (1746-1825), my maternal 4x great grandfather.  I have a substantial bit of data on Samuel and some special antiquarian publications in my personal library. Somewhere in the flurry of researching…reading and note taking,  I forgot about “A History of Wilkes-Barre, Luzerne County, Pennsylvania, Volume 1”.  It is chock full of some of most interesting details of the colonization of Pennsylvania AND the conflict of the settlers from Connecticut who came to the Wyoming Valley under the Susquehanna Purchase.

The clash between the “Connecticut Yankees” and the William Penn colonists was the result of two conflicting charters issued by King Charles II and complicated by the fact that in 1754 the English had secretly purchased the land from the Mohawks (the easternmost Iroquois Nation) not from the main inhabitants -the Delawares. [1]

In 1762 the Connecticut Yankees began to arrive and settle in the Wyoming Valley under the Susquehanna Purchase and establishing their first permanent settlement by 1769. By this time, Pennamites (settlers loyal to Pennsylvania colony) also claimed ownership to the area thanks to a purchase they made with the Iroquois. The two groups of settlers, as well as the various Indian groups, repeatedly clashed over rights to these lands—with sometimes deadly consequences. This period of time was called “The Pennamite-Yankee Wars”.

Among those “Yankee” settlers was Samuel Weyburn.

On the morning of Friday, May 12, 1769 twenty-four-year-old Samuel joined 24 of his fellow Yankees who, in a show of force and determination, rode up the Susquehanna to establish a fort under Major John Durkee. The group would pick up additional men along the way and eventually arriving in Wyoming Valley, numbered 146 individuals. Word went out to the Pennsylvania colonists and their authorities that this advance group would soon be a full complement of 500 men. It caused one of the Pennamite officials, Charles Stewart, to write in alarm to Governor William Penn describing the men and pleading for armed assistance.

“This afternoon about three o’ clock 146 New England men and others, chiefly on horseback, passed by our houses and are now encamped on the east side of the river.”

“From the view I had of those gentry, in their procession by our houses, they appear to be – at least an equal number of them – of the very lowest class, but are almost all armed and fit for mischief.”

In this letter, Stewart recognized a number of the men and listed them by name. Samuel Weyburn was among those ‘gentry’ listed.

As I am building the timeline of my ancestor in these turbulent pre-Revolutionary War days in Pennsylvania including his miraculous survival of the massacre on July 3, 1778 at Fort Wyoming as a member of the Continental Army Pennsylvania Rangers, I am compelled to consider what kind of individual could manage the continuing threat to his very existence.  Perhaps Mr. Stewart’s description of ‘fit for mischief’ would prove to be more accurate than he would ever know. 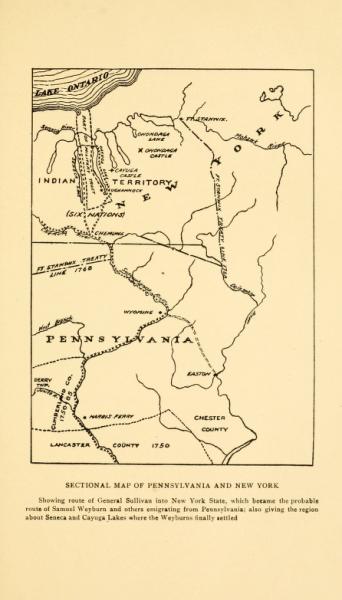 As conditions continued to be dangerous and uncertain and after his survival at Fort Wyoming, Samuel’s response in 1779 was to join forces with his neighbors and enlist in Washington’s Continental Army leaving his wife, Jane Bratton and their four children to manage the homestead in Derry, Cumberland county, PA.    Serving under Colonels Dearborn and Zebulon Butler, the Pennsylvania Rangers became part of Sullivan’s Campaign, the cruel response ordered by Washington to force the indigenous peoples from their homes and to punish them for their support of their English allies.

Sullivan’s Army followed the old Indian trails up the Susquehanna, through the Chemung Basin near Owego and on to the heart of the Finger Lakes.   There was little to no resistance and in many instances, the native Americans had fled in anticipation of the superior numbers of Sullivan’s Army.  Furthering my research on this experience, I have read several military journals and came across historian General John S. Clark (1823-1912) and his prolific knowledge regarding the Sullivan Campaign.   In one of his writings, “Aboriginal Footprints”, Clark describes Dearborn’s exploration of the west side of Cayuga Lake and Samuel Weyburn and his settlement at “Taghanic” and his interviews with the Carmans – direct descendants of Samuel’s through his daughter, Jane.

I have taken some pains to learn what traditions exist in that locality in regard to this matter and my interviews with many of the old residents have only resulted in strengthening the conclusions arrived at from the statements contained in Dearborn’s journal.  Samuel Weyburn was one of the first settlers at this point and his descendants state in the most positive terms that he never knew of an Indian town there.

When Samuel returned from his participation in Sullivan’s Campaign, he continued to serve in the Continental Army under Captain Robert Samuels.   At the conclusion of the Revolutionary War, there was still the issue of just who owned the land in the Susquehanna area.  Once again tensions flared and the Yankee-Pennamite War resumed.   Eventually the newly formed nation found common ground and the Connecticut Yankees were granted ownership of their land.  By that time, Samuel had already returned to Taughannock with the intention of settling in New York State.

This was the route followed from Taughannock Point southward by Co. Dearborn with 200 men, on their raid along the west side of the Cayuga Lake in September, 1779.  At the intersection of two county roads just south of Willow Creek crossing, along the Indian Trail, is a little-known boulder monument commemorating this brave expedition.

Over this trail, in the year 1790, came Samuel Weyburn, who traveled from Tioga Point (now Athens, PA) with his wife and four children. He built the first log cabin at Taughannock Point.[2]

Samuel and his wife Jane Bratton traversed the same Indian Trail to Taughannock with not four, but seven children: Samuel, Jane, Rachel, Sally, George, William and Elizabeth.  Elizabeth Weyburn (1785-1865) is my maternal 3x great grandmother.  Three more children were born to the Weyburns in their new home along the western shores of Cayuga Lake: Oliver, Clarissa and Isabella.

Samuel and his wife Jane are buried in the “Old Farm” section of Lake View Cemetery at Sheldrake’s Point along with son Oliver and daughter Clarissa – eleven miles north of Taughannock Falls.

Note to my Readers:  As a young child, I was always told that my “Ithaca roots ran deep”.  Of course, a kid thinks their grandparents are old and that any relationship to history likely involves them living in caves.  Truthfully, I didn’t think much beyond them or our family history until I was in my teens.  Samuel Weyburn was one of the first ancestors that intrigued me and I have spent a number of years, reconstructing his path from the colony in Norwich, Connecticut to his new home in Pennsylvania as a participant in the Susquehanna Purchase and finally his Revolutionary War service and eventual settlement along the shores of Cayuga Lake in New York State.  I was born just a short distance where he built his cabin in 1790 and it has been my heart home all of my life.

From the Journal of Lieutenant Colonel Henry Dearborn which was kept during the Sullivan Campaign.

“23d March’d at Sunrise proceeded without any path or track or any parson who was ever in this part of the country before to guide us and the land so horred rough and brushey that it was hardly possible for us to advance however with great difficulty & fatigue we proceeded about 8 or 9 miles to the end of a long cape† which I expected was the end of the lake but found was not From here We marched off 2 or 3 miles from the Lake and then proceeded by a point of compass about 8 miles & come to the end of the lake and incamp’d This lake is about 40 miles in length & from 2 to 5 miles in wedth and runs nearly N and S parralel with the Seneca Lake & they are from 8 to 10 miles apart.”

“† TAGHANIC POINT, formerly known as Goodwin’s Point. The bank of the lake both north and south of this, is very much cut up with ravines, and the lake shore is too rocky and precipitous for an Indian path. For several miles the trail was back two miles from the lake, along the heads of the ravines, probably passing through Hayt’s corners and Ovid Centre. From this high ground the lake appears to end at Taghanic Point.—J. S. C.”  (General John S. Clark)

“Samuel Weyburn was one of the first settlers at this point and his descendants state in the most positive terms that he never knew of an Indian town there.   The Carmans were among the first settlers in the vicinity and their descendants state that they never heard of there having been any traces of a village found here upon the settlement of the country by the whites, after Sullivan’s campaign.   That the Indians frequented this point for fishing and hunting is well known, but there is not the slightest evidence in support of a permanent village at the time Colonel Dearborn’s detachment passed up this side of the lake in September, 1779.” 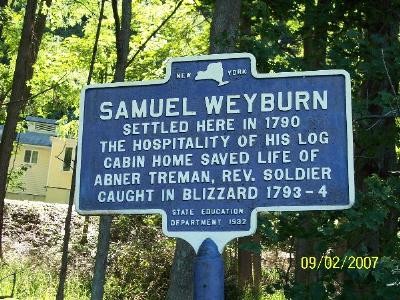 My maternal 4x great grandfather, Samuel Weyburn,  served under Colonel John Dearborn and Zebulon Butler as part of the Pennsylvania Rangers and participated in the Sullivan Campaign.   After the Revolutionary War, Samuel moved his family from northern Pennsylvania and erected a log cabin at Taughannock Creek where a NYS historical marker connotes the site.   Samuel and his wife, Ann Bratton Weyburn, are buried in Lake View Cemetery in Interlaken. 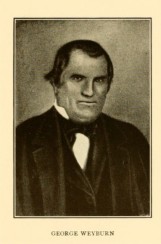 One of Samuel’s granddaughters, Malvina Amelia Weyburn, married Richard Carman and it seems likely that General Clark would have interviewed Malvina and her husband in their Enfield, Tompkins county home in his research.  Malvina’s father, George, was interviewed in 1844 about his boyhood experience with his father Samuel when they settled at Taughannock.  The well-known tale “Fight With a Bear At Taughannock” has been passed down the generations as a result of George’s graphic account in “New York State Historical Collections” by John M. Barber and Henry Howe.