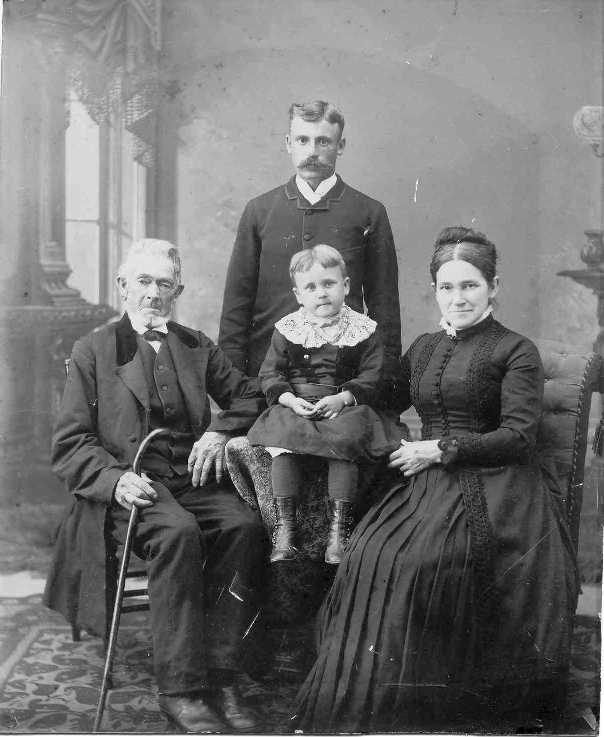 J. B. SWAIN OF THROOPSVILLE HAS INTERESTING REMINISCENCES.

How He Came to Auburn and the Many Things He Remembers About the Early Days.

To the Editor:
Seeing in the BULLETIN your request to old inhabitants of the city to write of the early recollections of Auburn, and observing the meagre details thus far, I was prompted to submit a few facts which I hope you will consider of sufficient interest to publish. I am not a resident of the city, but have lived within three miles of the prison gate for sixty-nine years.

I was born in New Jersey June 15th, 1799, and consequently nearly 90 years. When eighteen years of age I left home with my brother for the State of Ohio, then considered the far west. We traveled in a one-horse wagon, there being no railroads, and landed in Smithfield county, Ohio at the end of thirty days. I visited Pennsylvania, Virginia and Maryland until 1820, when I started for this county the called the lake region. I made the journey afoot, the distance about 500 miles, in just twelve days. I came by way of Pittsburg, Finch creek and up the Allegany river to Olean, then across to Pike Ferry, Moscow and Geneseo, and thence through Lima, Bloomfield to Canandaigua, and east to Auburn. There was about a foot of snow on the ground when I arrived but the weather was quite pleasant. The place was known as Hardenburg Corners in those days.

The walls of the first few acres enclosed for the prison were built by Lawrence White and Ralph Decamp of New York. At the conclusion of the work White built a house at the corner of Van Anden and North Streets, and lived there, rearing a large family. Decamp settled on a farm near Fosterville and remained there until his death. West Van Anden and Seymour streets were a wild swamp. The land from the site of the State asylum to Hackney was covered by heavy timber. It was in the woods at a point about where the asylum gate is now that the eccentric Lorenzo Dow used to preach. From that point south, to Clark Street, was a wilderness almost impenetrable.

Jack Harris was the first man received at the prison. He was sentenced to life imprisonment for burning the Rome, Oneida county jail. At the expiration of twenty years he was pardoned. He learned the coopers trade during his confinement, and upon his release he worked for John Hepburn, counting staves at the corner of Wall and Cross streets, until he was nearly blind. He was finally removed to the county house, where he died about ten years ago, aged 100 years. My father-in-law’s brother, Gideon Tyler, a small boy, was the first person buried in the North Street cemetery. The prison chaplain was Mr. Bowser, a Methodist preacher who conducted a chair factory on Market street.

On the corner of Mechanic and Genesee street in 1821 there was a general merchandise store owned and conducted by two brothers named Patty.  Mrs. Arnett, of whom Mr. Bostwick speaks, was a relative of the Patty’s.  Mrs. Arnett’s husband had the Cooper contract in the prison and I worked for him nearly five years.  Richard Steele’s drug store stands to-day in the same place it did then.   Walter Weed had a hardware store just below.  When boats began running on the Erie Canal, Mr. Weed built a basin for the craft to load and unload cargoes.  The point was then called Weed’s Basin, but it has since been changed to Weedsport.  In a two story building where the Auburn Savings bank now stands, U. F. Doubleday, published a weekly newspaper, the Cayuga Patriot.  A Mr. Lounsbury was employed in the office, also a Mr. Allen who finally became a partner.  Finally Mr. Doubleday got out of the business and the paper was published by Allen & Lounsbury.  There was also a two story building where Seward’s bank now stands.  The ground floor was occupied by Abijah Fitch, who conducted a dry goods store.  The second story was occupied by the Auburn Free Press office, a newspaper published by a Mr. Oliphant.  In a room in the upper story of a building which stood about where Hunt’ drug store is now located, Judge Miller had a law office and William H. Seward studied law with him, and Enos T. and Geo. B. Throop were then residents of Auburn.  The former was afterwards Governor of the State.

In 1820, Milton Sherwood, a son of old Colonel Sherwood who was then keeping the Stage house at the foot of Skaneateles lake, came to Auburn and built a stage house called the American hotel.  He conducted the house until the railroad was finished and there being no further use for stages he retired from the business, settled on a farm, near where the fair ground is now, and engaged in breeding fancy cattle.  There were two whiskey distilleries and one beer brewery in Auburn in 1820.

There were four churches – one Episcopal, a little wooden building on West Genesee street which was burned in 1826; the First Presbyterian, a wooden building, corner of North and Franklin streets; the Baptist meeting house on Exchange street; and a Methodist place of worship on Chapel street.  The place where Richardson’s furniture house now is was formerly a Universalist church.

In 1824 a company of light infantry was organized in Brutus, Sennett and Mentz.  It was named the “Brutus Blues.”  One night a man rode up to my house and notified me to be at Auburn early in the morning, well equipped, to escort the Marquis De La Fayette into the village.  The company mustered early and marched out some distance and met the distinguished visitor.  He was in an open two seated carriage with three or four of the prominent men of the village.  I do not remember the names.  We escorted him to the hotel, fired a salute and then broke ranks.

The first building of the Theological Seminary was began in 1825.  I could write a volume of early recollections but I will forbear for this time.

One thought on “OLD TIMES AUBURN”