A Note To My Readers: A gray day…thunder and rain. No wonder my muscles hurt. OUCH. Hauling out the aspirin. I think of my 2x great grandmother, Deborah Jane Tyler Curry and her granddaughter (my grandmother) Florence L. Curtis Purdy who had rheumatism. My turn.

A Tonic For What Ails You 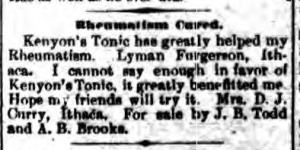 Deborah took a ‘remedy’ called “Kenyon’s Blood and Nerve Tonic” that was pretty much cannabis. That was no secret as other ‘druggists’ sold tonics with the same ingredients. Some even added chocolate for flavoring! Evidently Ithacans in the nineteenth century swore by J. C Kenyon’s Tonic. The newspapers were full of testimonials that declared their appetite had returned and they felt much better after one bottle. Uh huh.

also sold oils and paints which were treatments for corns and skin ailments at his mercantile on 6 E. State St in Ithaca. He was a regular CVS..selling cigars, manicure sets, perfumes.

And ‘Hot Weather Colognes’. A display ad in the “Ithaca Daily News’ reads:

“You can get them at TODD’s PHARMACY. Those odors due to perspiration can be covered with colognes until the bath-tub is conquered. You can find a large variety there, and unless your education in such things has been sadly neglected you should have them, and at TODD’S PHARMACY they are legion.”

Brooks sold his own brands – “Jamaica Ginger” and “Brooks Hot Drops” and “Sun Cholera Mixture” at his pharmacy at 30 East State St. He called himself “The King of Tonics” and his own concoction was dubbed “Brook’s Calisaya and Iron Tonic” and advertised as having the nourishing properties of ‘Beef and Wine” at 50 cents a pint. Calisaya…an herbal liqueur. Booze. 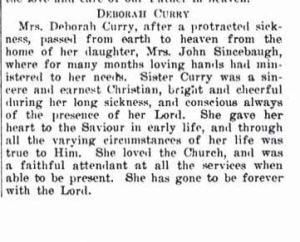 Well, look at this way..my straight-laced Methodist 2x great grandmother lived to be almost 90 and evidently bore her suffering cheerfully. Bless that tonic…