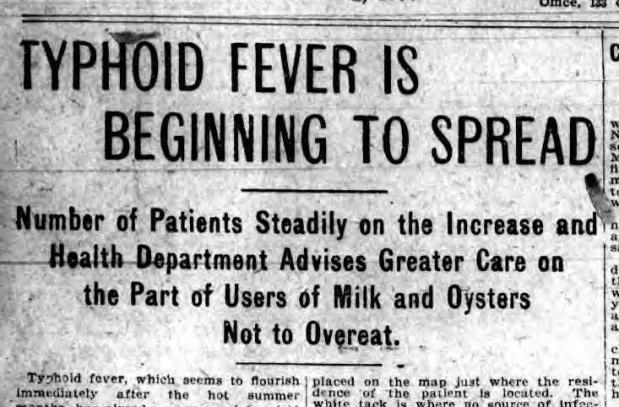 Note to My Readers: Part of a genealogist’s research involves delving into the world around our ancestors especially when there is something that seems out of the ordinary.   I have recently found the indexed information on my great grandmother’s New York State death certificate and sent away to Albany,  NY for a copy.  Lillian W. Jennings Martin was just 47 years old and a patient at King’s Park Asylum in Smithtown, Suffolk County, NY for at least five years when she died on July 18,  1905.

I began to read about King’s Park and its creation in 1885 as a ‘farm colony’ to care for Brooklyn’s ‘insane’ patients which included anyone who’s diagnosis ranged from mentally handicapped (idiot) to ‘hysteric’ (as you can guess women were those patients) to schizophrenic. It was a pretty terrible place where patients were subjected to lobotomies and electroshock therapy and were essentially locked away from the world.   Lillian’s diagnosis remains unknown to me though two factors are in play.  She was committed shortly after her daughter Lillian Florence Martin was born and her maternal grandmother, Orinda Bennett James, had been an ‘insane pauper’ inmate at Whitestown Insane Asylum in Whitestown, Oneida, New York at the time of her death in 1852 at the age of 62.  Postpartum Depression?  Incipient Dementia?   The Asylum was shut down in 1996 and records of Lillian are buried in some snaggled and bureaucratic mess.   If they exist anymore at all.

I ran across dozens of articles about the Heat Wave of July 17-19, 1905 that struck down easterners in astonishing numbers. Citizens in major cities east of the Mississippi were in desperate need of relief.  New York City found itself without the funds to ‘wash down’ the streets thanks to Tammany Hall corruption and ice handlers threatened to go on strike, but fortunately that did not materialize.  Ice was being given away for free to ease suffering and it wasn’t uncommon to see people in the streets of Brooklyn, Manhattan and Long Island chipping off pieces from the blocks that were placed in the streets.  The unclean streets.

By noon on July 18th thirty horses had collapsed and died in Brooklyn alone.  At nightfall the toll of horses dead from heatstroke was almost fifty animals.  Infant mortality was almost 80%.  The first day of the heat wave ten human deaths and two prostrations were reported and physicians advised populations to “(1) eat little or no meat, but ‘subsist on fruit and dairy foods’.  (2) Dress lightly in weight and color and avoid starched clothing as much as possible.  (3) Avoid violent exercise of any kind and keep in the shade.”    Still the populace collapsed and died. 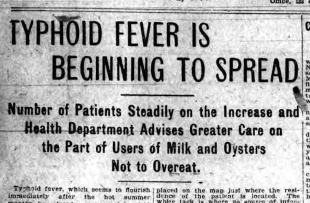 And then came the spread of typhoid. It was rampant and devastating. The Health Department had its hands full and hospitals were under siege with the heat prostration victims compounded now by typhoid. Advisories against consumption of oysters and milk were everywhere. But not ice. Not ice that was accessed by everyone on the fetid and sweltering streets by the desperate folks trying to get relief from the suffocating temperatures that reportedly measured 104 degrees Fahrenheit in the shade for three straight days.   The Stock Market seemed to be a victim of the torpor as traders themselves sagged under the oppressive heat.   As reported in “Billboard”, New York’s theater district was a ghost town as the more well-heeled citizens fled to the shores and mountains in pursuit of breezes and cooler temperatures. The Heat Wave of 1905 was reported in newspapers around the globe…Japan, Australia, London, Paris.

I scoured the Brooklyn papers that reported deaths on July 18, 1905 and for weeks after in the hopes that she was acknowledged. Nothing. Her husband, Henry had declared himself a widower in 1900 so was there shame?  It wasn’t uncommon for families to deny mental illness especially when a family member is ‘sent away’.  Perhaps Henry had been struggling so mightily to manage their children in the heat that providing a death notice to the newspapers was not a priority?  As one New York Times correspondent wrote:

“The suffering of the dwellers in the tenement districts is terrible. People sleep on the roofs, on fire escapes, in doorways, on the sidewalks-anywhere to get away from the suffocating rooms.  Yesterday an order was issued throwing open the parks at night, and every green space in the city was covered with sleepers.  The effect was exactly that of a battlefield.  All the ordinary rules of decency forgotten at such a time as this. Children bathe in the public fountains without any interference on the part of the police, and outside the public baths long lines men and boys stand waiting eager to lose no time when they are admitted that they have already divested themselves of almost all their clothing.”

King’s Park Asylum with its hundreds of patients no doubt had its share of prostrations and deaths due to the oppressive heat wave.  Did Lillian die due to the heat?   Will her death certificate reveal a truthful cause of death?   The conditions in New York City and Long Island may also explain why Henry’s son Albert…my grandfather…went to live in central New York (Auburn) with his grandfather’s family. Where he met my grandmother, Sarah Leona Penird.

Is my existence the result of the 1905 Heat Wave and a typhoid epidemic?