Tomorrow…February 8th…my father will have been dead 54 years..longer than he was alive.  I was 10 years old then and I am now almost 65.  Crazy to remember those events so clearly.  The blizzard of 1958 was fast upon the northeast and especially in my hometown of Auburn, New York.  As if a blizzard wasn’t bad enough,  it was exacerbated by lake effect snows and punishing gales.  We were being buried under 4 feet of snow and the gusting winds drifted it to cover our second story windows by the end of the record storm.

School was a normal dismissal that day.  We lived in Auburn, New York and were accustomed to snow storms…not panic.  My mother had finished the dishes and left my sister and I in the kitchen to fashion our valentines for our schoolmates.  The red construction paper, glitter and paste pots were out and I was overseeing my kindergartner little sister’s efforts to cut and paste the heart shaped valentines and to offer a hand at spelling her classmate’s names.  I can still smell the drifting chemical scent of the mimeo sheet…

I could see the intensity of the storm outside the kitchen window, but like most ten year olds…it was just the promise of no school and some serious sledding fun.  And my mother’s cocoa.

It wasn’t long before my father came home.  It was going on four and Daddy was never home until 5:30.  It was a strict schedule…dinner would be on the table…and piping hot.  He looked gray and tired that day…but the bright red construction paper and my sister’s struggle with her neophyte spelling was front and center.  As usual, he popped open the old Amana refrigerator and pulled out the glass bottle of prune juice…his “refresher” that we were not allowed to share.

My back was to my father…I stood at the counter fiddling with my own valentines when he groaned, fell back and knocked me to the floor.  Stunned, I rose to my knees and was staring into his face…eyes rolled back and tongue out…gasping and groaning for breath.  Agonal breathing, I know now.  He would be dead in just minutes.

I ran to my mother in their bedroom…talking gibberish…rushing and panicking…something is wrong with Daddy.

I don’t remember much of the next minute or so…just banging on the door of our next door neighbor…Office Eddie Stapleton was a new police officer…and trained as a Medic in the National Guard…my…uh..father…my father…  Eddie had just come off a double shift and though tired…clearly understood…brushed past me and into our back door…the drifting snow was already making it hard to push open the door.

I stood at the dark bottom of the stairs of our back door…no shoes…wet feet…cold, cowering and confused for some time.  I hear noise and crying and “Al!  Al!”  Eddie’s wife came through the door…pulling me from behind…along with my little sister…out of the stairwell and into the howling storm.

Through the chaos, Mary and I were deposited at the Michelow’s apartment…just doors down.  They had a lot of kids and it was noisy and normal there…and we…played.  It was like being popped out of a roller coaster on to a quiet oasis in a heartbeat.  My father’s last heartbeat. 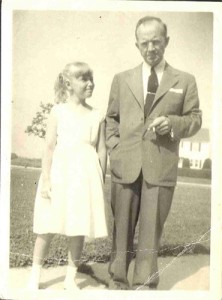 What did I know about death?  Nothing.  Life went on…things happened…or didn’t.  I held my mother’s hand and we ate ice cream.  My father took us berry picking and told me funny stories.  An endless journey.

Men carried us over the drifts…pushing the snow away…trenches had been fashioned between the back doors and I found myself in front of my mother in our small living room.  She was seated in the tapestry chair that was hers…a smaller version of my father’s “big” chair.  “Daddy is dead,” she gravely told me.  Dead?  What is “dead”?  Something in my mother’s hazel eyes told me what “dead” was and I flung myself into her arms…wailing.

Dad died of a massive coronary at my feet that afternoon. His falling body had knocked me over onto the kitchen floor.  I had been making valentines for my classmates and dreaming of sledding.   My father’s body was carried out of our home by fire fighters, police and neighbors…hand over hand over the tops of drifted in automobiles…and loaded onto a grader tractor…nothing else could get through.  He wasn’t buried until spring when the snow had finally left and the ground gave up winter’s cold grip.  He was just 52 years old and I was an old 10 year old that February day.  I had seen death.  I held my mother and prayed with her on our knees beside my bed that night while my five year old sister slept inches away.

Authors Note:  I have never before recounted that day in my life…though these decades later, it is one of my most vivid memories.  The smell of the mimeo paper…the potted glue…the peculiar smell that is in the air during a blizzard…I understand the dancing ions make that happen.