It is finally empty after decades of the presence of youthful energy, impatience and promise.  Young people will never again pass through its halls and out into the world to find their destiny and on occasion wonder at the fate of old friends and favorite teachers. 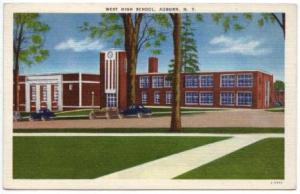 There is something so terribly painful about the reality of an empty school building. I am fighting the strongest urge to drive hundreds of miles home to once again walk the halls…sit in the science room…eat in the cafeteria…stand at my old locker and maybe run the full basketball court in the gym and listen for the voices of my friends just one more time.

I would like to sit at my desk in my homeroom – Room 207…gosh I remember!- and be surrounded by the earthy chalk dust ridden air and the musk of ancient layers of floor wax.   I spent six years in that building…a gawky and intimidated 12 year old girl…unsure of the maze of corridors…the expectations of growing up…all the time being supported by the team of teachers and administrators…and the gift of making friendships that would follow me the rest of my life.

Wandering room to room imagining the bells that signal the change of classes, I will close my eyes and imagine the presence of my 7th grade English teacher, Mrs. Kathryn Schnoop with her crown of white hair stained by the red pen she always kept tucked in her ear.  She had contracted polio when I was her student and the school was a brew of fear…oral vaccine programs and rumor.  Kathryn returned the following year with a hint of limp and a slight slur that did not deter her from her from ensuring her students could parse a sentence.  I loved her.

Or maybe I would conjure Stanley “Stash” Symula (Mr. Symula to his face…but Stash in our hearts) pacing and leaping at the blackboard while writing math equations with such enthusiastic abandon that chalk missiles would fly from his hand and over our heads.  He was a magician.  I was an A student that flunked ninth grade geometry.  After one semester with the Stash method, I was one of the top math students achieving one of the best Regent scores in the state.

Miss Viola Kraatz and Mr. Ed Blatz, our physical education teachers, with names so absurdly lyrical, that only their endearing characters saved them from snide adolescent humor. Those were the days of girls’ bloomer uniforms dyed in a bilious green – no doubt to dampen the hormones of even the most prurient teenage male mind.  Those were the days when girls’ basketball rules allowed us to only run half court…pass the ball, dear.  After watching the boys run the full court like joyful colts in a large pasture, I asked Miss Kraatz why the girls couldn’t run the full court.  Lowering her voice she discreetly and sincerely explained that it would not be good for our ovaries.  When I watch women’s college basketball now, I wonder…do you know your mothers only knew the short sprint to that half court line before they had to stop short…and pass the ball…and we could only dribble three steps?  How are YOUR ovaries, ladies?  Just fine, thank you very much.

Perhaps a visit to the library!  Yes!  Oh,  to walk boldly past school librarian, Mrs. Helen Clark’s,  domain and head directly to the “back room” that had been populated with books that only she could dispense.  The small airless room was jammed with one wobbly table surrounded by books that were deemed too sensitive except for the most mature student. There resided anatomy books that Mrs. Clark would earnestly hand to eager teenage boys who soberly (and oh so hypocritically) pronounced their desire to study medicine in college.  Never female students lest we faint at the frank illustrations, I guess.  Tucked in the gloom were the likes of Hemingway and J.D. Salinger…until Mike Orofino, our young English teacher, freed them from their prison and put them in our classroom.  I owe my stubborn need to know to the librarian that didn’t toss the books and the English teacher whose youthful energy convinced her to give them the light of day.

Down the stairwell and through the echoing catacombs to the cafeteria…to the stack of wet trays and past the steaming bins of goulash and creamed corn, tiers of white bread, cubes of impossibly red and green Jell-O, all served by generously built ladies in aproned shirtwaist dresses and whose heads were crowned with hair nets that tortured and tamed even the most stubborn curls.  Laden with the day’s special and maybe a brownie if I had an extra quarter…it would be a dash to the senior table where we ate lunch…and held court.

I’M INTO SOMETHING GOOD

Lunch time was a generous 45 minutes and the dancers never spent much time at the lunch table.  We ate as quickly as we could and dashed to the large area just outside the cafeteria where a turntable was set up with a selection of the latest rock n’ roll records.  A small hiss of the needle on the 45 rpm vinyl had us grabbing the hand of our favorite partner and for the last minutes of our lunch time, we flew over the terrazzo tiles on the notes of Bobby Darin, Sam the Sham and the Pharoahs, Sonny & Cher, Del Shannon…and sneaking into the American teenage musical scene…the Brits…Petula Clark, the Beatles and Herman’s Hermits.

Carefully.  Carefully…a mesmerizing ballad..Simon and Garfunkel…a slow dance for young lovers was tucked in among the lively rock n’ roll and under the stern eye of a faculty chaperone, embraces were righteously monitored…daylight between you!  The younger faculty would remind us with a slight smile and a wink…not quite conspiratorial and the older ones though tighter of lip, were betrayed by a wistful sternness that spoke of their own youthful days.  Our teachers…most anyway…liked us…and their teaching life.

FROM CHALK AND CHAUCER TO CLAY AND CREATIVITY

My personal mecca?  The Art Room.  A basement room located near the auto shop and woodworking…the industrial arts.  The large rectangular space featured a long bank of windows that were cranked open on most days and yet still heavily permeated with the smells of oil paint and linseed oil…plasters and inks and wet globs of sweating gray clay waiting to find form and flare.  Finishing my homework in study hall I would grab a hall pass, and trot (remember your ovaries, girls!) to Mr. Reynold’s art class room.  Before turning into the big space, a long glance down the hall revealed the open auto shop bay with groups of boys who would be waist deep in the engine of a car.  Woodworking shop was across the hall and was filled with all manner of tools including the treacherous lathe that so the story goes, claimed the fingers of our shop teacher.  Pine wood and machine oil hung in the air and perhaps a tinge of blood for my imagination.  The smell of automobile grease mingled with the pine wood pushed its way toward me before I would quickly turn and find the familiar soupcon of linseed and clay scented air.

And my locker where I stood between David May and Grace Manna in the din of the morning arrival…stashing sweaters in the fall, coats, mittens and boots in the long central New York winters…and the stacks of books and flotsam of school supplies.  The chaos of banging locker doors and raised adolescent voices inevitably were cut short by the ringing of the bells.  The shepherds gathered their lambs into the classrooms where we strained at the discipline by passing illicit notes, flirtatious smiles, engaged in amused giggles at the expense of those “old people” who saw us through our teen years and wished us success at graduation.  And turned to the next senior class to begin the process again.

I cannot finish this reverie without a nod to Dorothy Maywalt Bush, our school principal, who ruled the explosion of youth of the 1960’s.  It was the time of JFK’s assassination, the Viet Nam War, Civil Rights…the world around was tearing itself apart, reorganizing, suffering and dreaming of a better world.  We weren’t perfect…we were sent to the Kodak factory in Rochester for a Senior Trip that we had worked hard for…washing cars…selling cupcakes…endless fundraisers with a dream of a faraway amusement park that we had never seen.  Let us just say…Kodak’s  two year safety record ended the day we were there.  We were smart…and none of wanted to be factory workers.  After a brief conference with our advisors, we asked to go to the George Eastman Museum.  We had studied Latin with Mrs. Eileen Ditton.   We had read Salinger and Hemingway with Mike Oropallo.   We had no interest in repeating our parent’s lives.  We wanted the promise that George Eastman inspired.

Some 80 plus of us were ushered into the auditorium.  There was no cheerful music to herald a special visitor and honestly, most of us were baffled.  Did someone die?  Abuzz with our conversations and speculations, the room quieted immediately when Dorothy Bush entered stage right and stood before the microphone.  It had been lowered to its lowest position to accommodate her five foot stature.  Her purse was characteristically slung over her right arm.  And she cried.

Even the hardest adolescent heart was stung, but we had no idea…please…please who the hell had died!

For twenty minutes we were berated as a class for our shameless behavior.  A classmate had stepped over yellow lines……someone had needed a band-aid.  Dear God.  We had spent six years in the company of these teachers who taught us to have dreams and hopes of a bigger world.  And yet the betrayal was clear…we were the children of laborers.

Without a word, we paraded silently to our homerooms…not one of us understood what just happened.  Well maybe one…or two.

Perhaps we grew up at that moment and decided to declare our direction in life.  Encouraged by Mike Orofino, Elizabeth Gieselman, the chalk wielding Stash Symula, a half dozen of us went to the Principal’s office asking for a conference with our teachers and administration.  Shaking in our young shoes at the thought of confrontation, we spoke of our dreams…we had dreams and a future and a curiosity for knowledge that THEY had taught us.

I remember that little lady rising behind her desk and coming to each of us and first shaking our hand…like we were adults!…and apologizing.  I had learned great respect for her in those brief moments.  And I believed there was something bigger out there for me.

We were there forever and we were there so short a time.  I like to think that each of brought West High with us…and left something good and important there…history if you will.  A metaphysical history steeped in the 1960’s and everything it meant.  And everything we are.  Something that lives in the brick and mortar of the building…in the terrazzo floors…in the chalkboards…in the golden planks of the gymnasium floor…on the playing fields and sidewalks.  Because history means something…even our own.

One thought on “SOUNDS OF SILENCE”