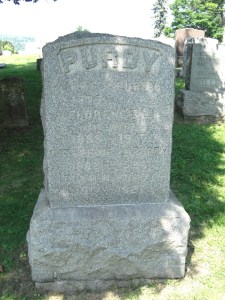 When I began the process of family research and story writing several years ago, I learned that there was more to it than just the information.  Sometimes the source of information became the story.  One of those moments came when I was searching for my great grandmother’s possible burial location in Lake View Cemetery in Cayuga Heights.   And instead I found Scott.

I had been unable to locate Grandma Smith’s burial in any published burial records and so began the task of contacting the cemeteries directly in the area for help.  My grandparents, Burt and Florence Purdy and two aunts, Kathryn and Ruth are buried in Lake View and so it seemed the logical first telephone call.

I called Lake View Cemetery just as Scott was leaving for the day.  Scott Goodrich was born and raised in the Ithaca area and spoke with a genuine central New York accent that makes me homesick.   He was immediately enthusiastic to help.  At once I heard the keys clink on the desk and the squeak of his chair as he told me to hang on.  “I’m gonna put you on hold and go to the office where the records are…if ya get hung up on…call me back.  I’m not really good with the phones.”

Just a few seconds later the phone clicks and Scott is back….another chair squeaks and I hear a thump as Scott tells me he is at the records books.  I gave him Grandma Smith’s full name, date of birth and death to help in the search.  Elizabeth A. Williams Purdy Smith.  Along with her information, I informed Scott that her son and daughter-in-law and granddaughters were buried in Lake View.  Burt and Florence Purdy and daughters Kathryn and Ruth.  “Gotcha.  I’m on it,” Scott replied.

After a minute or two, Scott is pouring through their own peculiar cataloging system and finds Florence Purdy in the card system…”no Burt…but ah yeah…Ruth and Kathryn”.  He laughs and says that “people aren’t real conscientious about filing the cards and it’s the books that count”.

Another big thump and I assume the book is on the desk and then I am reassured when I hear…yes hear…pages turning…  Scott is mumbling names and numbers and says…the word “leg” and so I HAD to ask him what he just said.

“Oh, I was readin’ the burial records and it says “Williams, Jimmie.  Leg.”  Now what do you suppose that is?” he asks.  He’s still turning pages and by now I suspect reading everything for bizarre burial information and we start to talk about how many people were hit by trains in the old days and maybe all that was left of Jimmie was a leg.  After much speculation on Jimmie’s leg and pages later, Scott finds the book records of Florence, Burt, Kathryn and Ruth.  By now Scott and I are pals and he asks, “Did your family have money?”  I knew Grandma Smith had money…but we all know she controlled it so that Burt didn’t…or Florence either.  So WHO bought the plots???

Scott went on to tell me that only “money” could afford to be buried at that time in Lake View AND the board controlled who bought in there as well.  So money AND social standing was the order of the day.  Grandma Smith had both but after a ten minute phone call, I was still left with the question…Where is the grand Grandma Smith???

Scott was warming up to the story and the chair squeaked and the books thumped as he scanned more cards and books…and he continued to offer more disconnected mutterings.  “Gun… Shot…Self…Scarlet fever…B128…1880.”  I knew not to interrupt Scott since it had a tendency to ruin his rhythm, but I was concerned once he said, “Oh Wilson.”  “No, Smith,” I emphasized, realizing that he had heard me say her maiden name Williams all way back in our early conversation and that put him into the section with Jimmie Williams and  his leg.  And Wilson was going to really send him heaven knows where.

“SMIIIITH!” Scott exclaimed…”Now it’s REALLY going to be hard.”  I laughed and once again was treated to the familiar squeak, thump, and mutter method of searching.  After a few minutes, Scott announced that she simply wasn’t there.  I figured we had had a good “go” at it and Scott had been a champ…after all he was a volunteer and on his way home when I put him to the task.

Next thing I know Scott has rounded up someone else and they were talking about cemeteries and “where would someone go in Ithaca that had money?”  Names were bantered between the two…mausoleums and the like were discussed.  As he pops back on the phone, he was emphatic.  Lake View was THE place. “Nothin’ else would be okay in those days…in Ithaca that is.”

“Hey, you wanna know what’s on your family’s burial records?” Scott interjected.  I figured it wouldn’t involve Jimmie’s leg and he seemed so disappointed that he couldn’t find Grandma Smith….so …why not.  Burt died of acute perontonitis (sp); Florence, atherosclerosis; Kathryn, hemorrhagic sarcoma (the rest of the entry was unclear) and Ruth, crushed chest when hit by a car. “Fine,” I squeaked not realizing that this would be unsettling information.  I needed to pick up the conversation and the mood…. “So what’s next…if she’s not there and…?”

By now I had been on the phone for some time with my dear and close friend, Scott…he’s a semi-retired building contractor…he and his brother…They haven’t built a spec house in two years and, oh, he bought a new puppy today and he hopes it doesn’t poop next to his bed in the night and…oh…sorry…where was I?

So I tell Scott that Grandma Smith was Elizabeth A. Williams born and raised in Enfield.  Scott had a new burst of energy.  “ENFIELD!  I was born and raised in Enfield.  My mom…bless her heart…she’s not so well these days…still lives there.”  The newly energized Scott asks about the Williams family.  So I go into my Enfield routine…Williams, Van Dorn, and Purdy.   I barely said the words Van Dorn and he was saying “Van Dorn Road!!”  I said, “Yes…those Van Dorns”… a little concerned that I was going to hear a Van Dorn story that wasn’t too attractive.  Scott has lots of stories.   No such thing.  He knew the farms and the roads and where Samuel D. Purdy’s store was…it is still standing in Enfield Center according to Scott.  “Can’t miss it….all old timber if ya know what old timber looks like.”  I assure Scott I have an idea.

By now I had spent almost a full hour on the phone with Scott and had to get back to my paying work, when Scott sends out his personal invitation to Lake View and advises, “Take the little road behind the high school football field.  It’s easier to get down to your grandparent’s section.  It’s only one way and you would be goin’ the wrong way, but we really don’t mind.  That’s for the high school kids so they don’t come down here to smoke pot and …well you know.”  I guess I gave my age away when I talked with old Scott…who felt I was no danger to Lake View’s back roads… smokin’ pot and well you know.  SIGH. 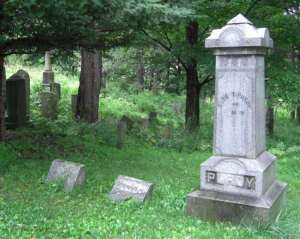 So the search went on for Grandma Smith.   I eventually found them both buried in Enfield in the Presbyterian Cemetery.   From time to time I have run into another “Scott” and spent time while they pour over entries like Jimmie’ s leg and a tale of a railroad story mishap or two.  And though empty handed in my original search goal,  I come away with a character story that just HAD to be told.

For my fellow researchers, I hope that if you hit a brick wall that you pick up the phone and get comfortable and someone like Scott answers the phone.

One thought on “But Where Is Grandma Smith? – Notes from the Field”